50,000 fans made their way to Old Trafford Cricket Ground, for a much-anticipated gig, headlined by Manchester giants The Courteeners, with support from Johnny Marr, Blossoms and The Big Moon.

As the gates open the fans are already rushing in, keen to grab the best spots, one of the things the cricket ground has is space, and a great view can be had right around the arena.

First up are The Big Moon, who have made the trip up from London, and are the only band not hailing from Manchester. It is clear from the beginning that they have come to enjoy themselves, throughout the set we were treated to addictive guitar riffs, intrinsic melodies. The band consists of Juliette Jackson, Soph Nathan, Celia Archer, Fern Ford. Best Known for “Sucker”, and “Eureka moment”, the band delivered a set full of indie, grunge influences. By the rapturous applause at the end of the set, things are looking good.

The crowds are still piling in 20,000 plus are gathered for Stockport’s kings in waiting, I don’t think there is any doubt that the rise of Blossoms will soon see them and their loyal fan base stepping up and headlining venues such as this. This appearance is on the back of selling out the AO Manchester last week. Opening with “Your Girlfriend”, and instantly building a great rapport with their fans. Frontman Tom Ogden seems to have found an inner flamboyance, dressed in a lime green suit, and covering the stage with real swagger and confidence, Jarvis Cocker comes to mind. The band seamlessly play out all the hits and keep the fans in a heightened state of excitement, finishing with a rousing version of “Charlemagne”. It was as if they had kicked the ball into the next acts court.

Well, if that’s what they had intended, the main support for tonight is Johnny Marr, if Blossoms are kings in waiting, Marr carries the mantle of legendary iconic status. Looking out over the crowd it must be near capacity and after Blossoms’ set a real buzz is rising from the crowd. Taking to the stage, to huge chants of ‘Johnny, Johnny, Johnny Fuckin Marr’, he’s instantly belting out the Smiths’ anthem, “Panic”, playing a trio of his own tunes including “Easy Money”, Marr is in his element and the crowd are loving every moment. 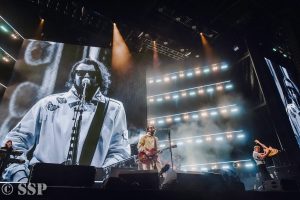 The rest of the set was a trip down the backbone of Manchester music, to be more precise the life and times of The Smiths, with an Electronic “Getting Away With It”, track thrown in for good measure. The crowd are still chanting Johnny fuckin Marr, as he asks has anyone peaked yet. If they hadn’t peaked, could they hold on for another 30 minutes until he finished his set, the anthems kept coming. “How Soon Is Now?”, “Bigmouth Strikes Again”, Marr and the excellent band around him are laying down a perfect platform and masterclass of performance that on other occasions would be befitting of a headline spot.

As Marr closes out his set with “There Is a Light That Never Goes Out”, I don’t think I was alone in thinking how big a place we would need if it was The Smiths, sorry I let my head get carried away. The crowd absolutely loved every moment of Marr’s set and the place are alive and chomping at the bit for the Courteeners.

The air is electric, and the built-up tension is ready to explode as the band enter the stage, I lose site of the band for a few moments as the smoke bombs and pyros fill the stage, standard for the start of “Are you in love with a notion”. “Cavorting follows”, and the band are in full flow, the participation of the crowd is loud and euphoric, the backdrop of another fantastic set sees live images beamed 30 foot high and a lighting rig that pierced the black sky that would have been seen for miles, pretty much like the crowds singing.

The set list is growing, “Fallowfield Hillbilliy”, “small bones”, “The 17th”, they keep coming. Liam Fray embarks on a solo set with “The rest of the world has gone home”, “Please don’t”, and rather aptly with tonight’s support “Smiths disco”, completely resetting the pace. The band return for a six-song encore, commencing with “hanging off your cloud”, and including “heavy Jacket”, that seems to have been part of the set for the last decade. “Not nineteen forever” and “what took you so long”, bring the set to an end to what has been a memorable and boisterous evening. As the fireworks light up the sky and the band gather arm in arm for a well-deserved appreciation from their devoted fans.