A biblical night in Manchester as DMA’s returned.

As the crowds descended on Victoria Warehouse, on a rain soaked night in Manchester. Yes I know it’s Manchester, it always rains, this rain was of biblical proportions, the fans where queuing up in the deluge way before the doors opened, all waiting to try and get the best vantage point, for the first night of a three nigh, sold out residency in Manchester by Australian idols The DMA’s. Not bad from a bunch of lads you would easily walk past in the street.

Opening act tonight is the excellent Pins. The all-girl band are a tour-de-force, a no-nonsense brand of Rock. PINS are an English rock band, formed in Manchester in 2011. The group consists of singer/guitarist Faith Vern, guitarist Lois MacDonald, bassist Anna Donigan, keyboard/guitarist Kyoko Swan and drummer Sophie Galpin. Pins delivered a super set to the gathering crowd who thoroughly enjoy the set, “Girls like us”, and “Too Little Too Late”, are stand out pieces of the set.

Next up are Liverpool band The Night Café. The band consists of Sean Martin, Josh Higgins, Arran O’Connell Whittle and Carl Dillon.  They stand out a little more than most indie bands as they have very distinct sound with melodic drum beats and alluring lyrical work that works to the lead singer’s Liverpool accent. It accentuates and defines them as a very northwest band. “Get Away From The Feeling”, one of their earlier tracks works well, along side the newer “For Better Days”, I have a feeling we will be seeing a lot more of them next year.

What is it about tonight’s host the DMA’s that have people queuing in the rain for the first of three shows? You can’t quite put your finger on it. There is something special about them, this tour has finally let the band showcase their latest and third album, “The Glow”, an album we have all had time to become acquainted with during the enforced lockdown. 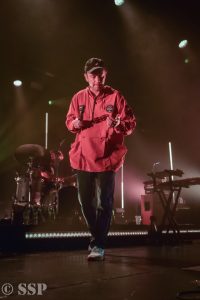 As they take to the stage, immediately launching into “Never Before”, it’s clear there is a lot of love in the room for the trio. As a live band there are no theatrics, they have a real stage presence. The band consists of Tommy O’Dell (lead vocals), Matt Mason (lead guitar and backing vocals), as well as Johnny Took (acoustic guitar). In the past they have been pigeonholed as Oasis/Stone Roses, wannabees, they may have influenced the way they play and perform, but I say they have their own identity and brand.

“The Glow” is the second offering for the night and really showcases Tommy’s vocals. A fine and confident delivery, one many Britpop front men strive for. “We Are Midnight”, layered guitars that are as transient and melodic in equal proportion. “In the Air”, and “Hello Girlfriend”, keep the rather vocal crowd in full voice. “Tape Deck Sick” is acoustically perfect and Tommy’s voice seems to bring things onto a higher plain. 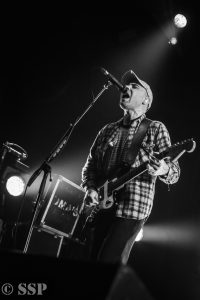 As the band finish the set to incessant chanting to “Play It Out”. This is one of those watershed moments one where you can say “I Was There”, I don’t know whether it’s the Gallagher/Brown influence or the down to earth sing along tunes, but the group have  a vast growing army. They seem to have hit the right button.

Returning for the encore of “Appointment”, “Lay Down” and the showstopper “Feels Like 37”, the crowd leave to battle the Manchester rain once again, although I have a feeling many were singing and dancing their way home.

A momentous evening, from a band that is setting the standard of music and performance for the future.