Skip to content
Live: Do Nothing At YES Manchester

A Packed Night In The Pink Room

Do Nothing Finally Got To Come To Manchester

This is a gig that has been a long time in waiting, and even up until the start of this week, it looked like it may not go ahead. A positive covid test lead the band to cancelling two of their nights on the tour, but thankfully they managed to find a replacement drummer and all test negative so they could perform in Manchester and continue the rest of their tour. This gig was originally scheduled for last year, so the anticipation was building right from then, and it did not disappoint.

Opening the night were Folly Group. I hadn’t heard of nor seen the band before, and I’m glad I managed to make it down early enough to grab their set. The band are made up of 4 members, two of whom are percussion based, with a drummer (who also takes lead vocal) and also a member of the band on drum machines, synths, shakers, cowbell and cymbals to fill out the sound. With this, they bring something fresh to a relatively saturated scene. They had a touch of Rage Against The Machine’s anger and power to them, mix that in with Afro beats and a sprinkling of bright, jangly guitar, there isn’t another band out there that I can think of who are creating a sound even close to theirs. They aren’t a band who are jumping around on stage or jumping into the crowd, nor are they a band who have much crowd interaction at all, but they a focused on their instruments, and you feel unable to look away as they power through their captivating set.

Neither band had incredibly lengthy sets, Folly Group pulled out around 30-40 mins and Do Nothing followed that with around an hour of their material, but it’s not always about quantity, it’s about the quality, and that is something that both bands have in abundance. 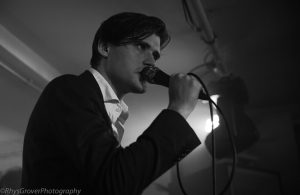 Do Nothing are on their second EP so far, so as you can expect, they don’t have an extensive back catalogue to pull tracks from, but they did have some new material to offer and it went down well. They opened with what is clearly a fan favourite, ‘Uber Alles’ which was the first single from their latest EP, ‘Glueland’ and it was the title track from that EP which came next in their set. The beauty of smaller venues is that when you are shooting, you are in amongst the crowd, there’s no barriers to separate you from them, and whilst it can get a bit worrying as your cameras take the odd knock, it helps you get a real feel for the energy in the room, and believe me, the energy was incredible.

Next up was ‘Contraband’ a track off their first EP, ‘Zero Dollar Bill’ and the video for this track was released during lockdown last year, so for fans of the band, it’s a track that will always be associated with that time, and a track that will have got plenty of play over the lockdown due to their not being much else to do. It was in this track that frontman Chris Bailey was able to really start expressing that signature persona he has, and from this moment on he didn’t hold back, delivering his lyrics in his own expressive way. ‘New Life’ followed on from ‘Contraband’, the reverse of how the tracks fall on their debut EP.

Track five for tonight was a taste of something new from the band, and the track goes by the name of ‘Rat Myth’. Whether this means a fresh EP, or maybe a debut album on the horizon, we will have to wait and see, but fans will be eager to have this track in some form of release very soon. It slipped into their set seamlessly, and fans managed to pick up the lyrics pretty quickly and join in before the end of the track.

No more new material made its way into the set, but hopefully they have some more under their belt which will be released soon. The second half of the set was formed of their biggest tracks, the ones with bigs choruses, and tracks which fans have shown huge love for over the past couple of years. ‘Rolex’, ‘Waitress’ ‘LeBron James’, and ‘Handshakes’ was the running order, and energy levels built with each passing song, before reaching a fantastic crescendo for their closing number, in the form of ‘Gangs’.

A set from Do Nothing isn’t flashy, it’s not in your face aggressive, but the style and persona of each member, and the delivery and animation of Chris lead to it being one of the most enjoyable sets you can possibly watch.