It Was Night Two Of Three For Fontaines DC!

The band were supported by The Altered Hours.

The Altered Hours warmed up the crowd for the night, as they have done for the whole tour. They delivered a fantastic set and a fair majority of the crowd knew most of their tracks, and those who didn’t soon got into the swing of things, and proceedings were off to a lively start already. They played around a 30 minute set, and the moment everyone was waiting for soon came around.

The stage was littered with the lighting rig of Fontaines DC, and as the band came onto the stage, it glowed and lit up Manchester Academy for the second night in a row. The crowd were ecstatic to see the Irish five piece, and were bouncing from the opening notes of ‘A Hero’s Death’, the title track of the album which the band are on tour promoting. They followed their lively opener with another track from their latest album, in the form of ‘A Lucid Dream’, and it’s fantastic to see the crowd getting behind the newer material just as much as they get behind the material from the first album.

It was a track from album number one that took third place in the set, and it was the incredible ‘Sha Sha Sha’, and the anthemic chorus was a sight to behold, as not only was frontman Grian Chatten belting out the lyrics with full support from the extremely lively crowd. Energy levels were already at the max, and we were only on track three. It’s rather surprising to see how lively a Fontaines DC crowd can get, as when you listen to their albums, their music is punchy and energetic but with a certain calmness to it, but when performed live, the raw energy comes sailing through and the on stage energy soon filters out into the crowd. 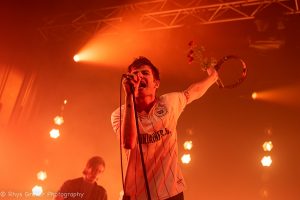 As I headed to the side of the stage after shooting the first three songs, Fontaines stormed into another track pulled from ‘Dogrel’, with ‘Chequeless Reckless’. At a Fontaines DC show, one thing is for certain, the band really don’t mess about. Powering from track to track, as their adoring fans follow along with the rollercoaster of a setlist, hanging off every guitar note, drum beat, and every single lyric uttered by the fantastic Grian.

I headed to the back of the venue to watch the remainder of the set, and really soak up the atmosphere of the night. Fontaines ploughed through their set, pulling together a great mix of the old and new, trying and succeeding to please their fanbase with every track they decide to place into their setlist. With them not taking all that much time in between their tracks, the night is a tad shorter than you would expect, but it’s packed to the rafters with incredible music instead of relatively needless chatter. Wrapping up the initial set with what is their biggest track, ‘Boys In The Better Land’ nearly blew the roof off of Manchester Academy, and it was easily one of the best atmosphere’s I have seen since live music returned just a couple of months ago.

There wasn’t much left for the band to play, but the band pulled out all the stops, delivering a two track encore made up of the fantastic “Roy’s Tune” and ‘Liberty Belle’. The night was ended in fantastic fashion, and there wasn’t much more anyone could have asked the band to do. Fontaines DC are one of the best bands around, and I’m eager to see what the band have in store for the future, and I cannot wait to watch them grow into the fantastic band they are sure to become.

Fontaines DC return for one last sold out night in Manchester tomorrow (8th October) before containing an extensive tour of the UK, which kicked off around a week ago! Check out the schedule, and grab yourself any remaining tickets here.