Skip to content
Live: Inhaler Wrap Up Tour In Manchester

Inhaler Finished Their Tour With A Powerhouse Performance

The Band had support from Dylan Fraser and Wet Leg.

Inhaler breeze into Manchester for what will be the final concert of their fully sold-out tour. Manchester’s Ritz theatre saw fans queuing early in the afternoon, to get the best spot once the doors opened.

Having secured a coveted number one slot with their debut album, the buzz around Inhaler now is that things are really building a momentum. None of this is hype, what you have is a band that are developing their own style, an album that has hit after hit written all over it.

First up was Dylan Fraser, who has a great repertoire of songs and a great connection with the crowd, From Bathgate Scotland, “I do these things for me”, “I’d rather be here” and “Nightmare are stand out tracks, which I am sure are going to bring a lot of attention to his future work.

Next up are Wet Leg, not knowing anything about the band I was looking forward to hearing what they had to offer, coming from the Isle of Wight wet leg are made up of Rhian Teasdale lead vocals and guitar, and Hester Chambers Vocals and lead guitar, tonight they are joined on stage with three other musicians, for their set. what a surprise, the music seemed to build starting off great vocals simple but melodic guitar, building and breaking out to a post punk indie rock vibe, Chambers laying down some gritty guitar whilst Teasdale has a vocal awareness, of a polished and comfortable performer, as the set progressed, they had the vast crowd in a boisterous mood. No mean accomplishment for a band very few of us had any knowledge of, “Wet Dream”, a song about breaking up and their other single “Chaise Lounge”. Show that there is more to come from these dark horses. 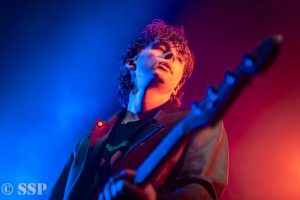 A darkened set and billowing smoke flowing off the stage see Inhaler enter the fray, instruments at the ready and straight into, “it wont always be like this”, I have a feeling they could be right judging by the crowd singing every word at the top of their voices, we are on the crest of another band on the verge of great things.

There is no pretentious prattle or playing up to the crowd, they are a very well-rehearsed and powerful band, playing through the album , song after song has its own intensity, grinding and searing guitar riffs, booming and moody bass lines all kept in pace by a back beat of drums, all hailing from a band that are relishing the live performance, “ I have to move on”, followed by “another like you”, see the band cutting loose, along with the crowd vocals getting louder, its been a long time since I have witnessed a crowd this intense and entranced with a band for a long time. 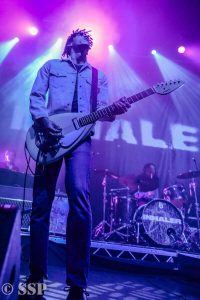 Eli Hewson is the much-mentioned front man, son of a famous frontman in one of the greatest rock bands ever, so famous in fact we know him by one name. Hewsons vocals are as much a part of the band as the intensity within their playing, his vocals are backed up by the rest of the band who gel and home in on his delivery. Strutting the stage as if they have done this for the last decade adds to depth of how energetic this performance is, “My King will be kind”, is simple and yet complex in its delivery, it reminds me “Feelin”, by the La’s a proper ear worm.

Whilst “Cheer up baby”, brings the house down, may I just say it is bloody hot in here 1,500 people dancing swaying bouncing, vocally on top form, the band finish with the real powerhouse tune “My Honest face”. Will this be one of the last times we see the band playing a venue of this size?

Inhaler were born to perform, an album that will keep us going for now, but I already have a thirst for what’s to come, standing on their own feet, they are breath of fresh air for the future.