A triumphant return to Manchester for the Indie heavyweights

Kasabian fans have been waiting for this tour for a while. They haven’t performed live since 2018, and since then the band have been through uncertain times. Tom Meighan left the band following a court case, and it was never a certainty that they would return, but now they have, and Serge Pizzorno took the position of frontman, as they brought in Rob Harvey from The Music to fill Serge’s spot and assist on vocals. Big shoes to fill, and I’d safely say he has filled them perfectly.

As with the whole tour, The Skinner Brothers took the support slot, and it was a nice opener for the night. The band are constantly growing online and making a name for themselves on the live circuit, so it won’t be long before we’re hearing much more about these guys.

A DJ took to the stage in-between the support and Kasabian, and kept energy levels high with sing along anthems such as ‘Charlemagne’, ‘Sweet Caroline’ and ‘Not Nineteen Forever’. And as she departed the stage, a huge roar was let out, the lights went down and on came the tour-de-force that is, Kasabian.

A key feature of the night was the polka dot laden look that the band have adopted for these dates. Drums, guitars, the backdrop, the stage itself, and even the roadies were clad in black and white polka dots, and I was half expecting Serge to have donned some sort of polka dot onesie or other attire, however he opted for a solid military look, similar to the look he went for when he performed his solo project, The S.L.P a couple of years ago.

‘Club Foot’ was chosen as the opener, and it was clear that this reincarnated Kasabian meant business from the off. Energy levels were high on stage, and Serge was moving around like he had a rocket up his arse, hyping the crowd up at every possible opportunity, and putting on one of the most lively and captivating performances I have seen in a long while. Kasabian have a long-standing fanbase who adore the band, and it was great to see them accept Serge as the frontman as the band take this new direction, with frequent chants of ‘Sergio, Sergio’ coming from the ecstatic crowd.

Proceedings were continued in a lively manner with ‘Ill Ray (The King)’, which was possibly the biggest track from their last album, ‘For Crying Out Loud’ which was released way back in 2017. I think the band were well aware they had to deliver a set which would please the crowd and make them feel like nothing had changed, and by picking some of their titanic hits to open with, they did exactly that. If somehow you were only just getting into Kasabian, it wouldn’t appear the boat had been rocked at all. 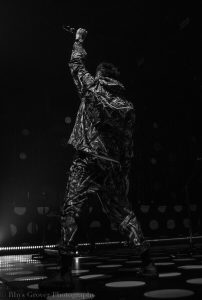 Showing absolutely no sign of dropping off, the band blistered through two more titans from their discography in the form of ‘Underdog’ and ‘You’re in Love With a Psycho’. Each note, each vocal line, each riff, sounded monstrous, and every response from the crowd was just as loud. There was an admiration on both sides of the barrier at the gig. The band clearly loved being back in a room full to the brim with adoring fans, and the crowd were visibly over the moon to have the heavyweight’s of Indie back on a stage doing what they do best.

By track five, I had made my way out of the photo pit, and to the back of the crowd, which was the perfect vantage point to watch the band strut their stuff and be fixated by the atmosphere as the night rolled on. It really isn’t often that every member of a crowd bounce, from front to back, and  this night was one of  the few where that happened. At some point or another, every one in that (strangely chilly) venue had their arms in the air, or was bouncing along to one of the tracks, including even the bar staff, who you rarely see partaking in any form of enjoyment of the gig.

Tracks such as ‘Shoot The Runner’, ‘Stevie’, ‘Empire’ and ‘Vlad The Impaler’ made a strong appearance in the initial part of the set, but the atmosphere was cranked to 11 for their four track encore, which was made up of ‘Bless This Acid House’, ‘Happiness’, ‘L.S.F (Lost Souls Forever)’ and ‘Fire’ closed the night.

With a fair portion of the tour remaining, and festival dates announced for 2022, it seems like the new iteration of Kasabian is here for the long run, and I for one cannot wait to see what they have in store for their incredible fans.