A Fantastic Night Of The Old And New

Manic Street Preachers released their 14th studio album, ‘Ultra Vivid Lament’ in early September, and are currently on tour to bring the new album to fans across the UK, and alongside the new material, the band are also playing some of their all time greats. Throughout the tour, they have been accompanied by the fantastic Low Hummer as support.

I had not long been in the venue when Low Hummer took to the stage of Manchester’s O2 Apollo, and they were met my a rapturous round of applause and cheers from the crowd, who had come down in big numbers early on. I hadn’t heard of the band until tonight, but their brilliant set was refreshing to witness. They are a five piece band hailing from Hull, and have recently released their debut EP. Their double fronted, with the front woman having vibes of early Debbie Harry met with Stevie Nicks, and the frontman being the equivalent to the lovechild of Ian Curtis and David Byrne. 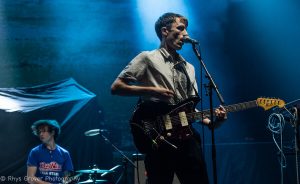 After Low Hummer delivered their fantastic set and warmed the crowd up nicely, a short but rather stunning light show danced around the stage as the members of Manic Street Pictures took their places on stage, ready to take the roof off the iconic venue. Opening with one of their biggest tracks, ‘Motorcycle Emptiness’ the crowd lapped it up and the atmosphere was at a high from the start. They followed their lengthy opening number with ‘Orwellian’, which was the first taste of the new album for the night, and despite having not been in the public domain all that long, the crowd seemed to know every word.

The thing about a Manic Street Preachers show is that it is hit after hit, and there’s tracks you will hear that you didn’t actually realise were by the band. Track three for the night was the fantastic ‘Your Love Is Not Enough’, which still sounds incredibly bright and fresh despite having been around for more than a decade. It was a similar feel all night, one or two tracks from the new album followed by an incredible hit from their extensive back catalogue.

An exception to this was in the latter half of the set, as the band delivered a bit of a cover section, when they delivered a small section of The Cult’s ‘She Sells Sanctuary’ followed by an outstanding cover of ‘Sweet Child o’ Mine’. Spirits had been high all night, and the fans had loved every minute, but this really was something special and an incredibly memorable moment for the crowd. From here the band pushed on, continuing to deliver their latest material to the adoring fans, before they wrapped up with one of the biggest tracks in incredible fashion, ‘A Design For Life’.

It’s fantastic to see a band who have had such huge success over the years to still be adored and to still be touring new material, and it’s even better to see them giving support slots to bands such as Low Hummer, especially considering that Low Hummer’s last Manchester gig was at the tiny Jimmy’s, and now they were playing to a huge crowd at Manchester’s O2 Apollo!