One Of The Most Energetic Live Bands There Will Ever Be!

A healthy crowd had already gathered by the time The Utopiates took to the stage to kick things off, they had a similar vibe to The Pigeon Detectives without the lively on stage antics. It’s good to see bands who have been around a while such as The Pigeon Detectives giving support slots to upcoming talent and allowing them to grow and expand their fan base, although The Utopiates are clearly doing things right, as a large portion of the crowd were singing along to the set.

A quick turnaround on stage and on came the second support, in the form of Ed Cosens. You may or may not know Ed Cosens, but you will have definitely heard his work before, as he is the guitarist for Sheffield legends, Reverend & The Makers. Earlier this year, Ed released his first solo album to critical acclaim, and will be headlining a gig in Sheffield later this year, but he’s been on this tour with Pigeon Detectives to push and promote his incredible solo work. When the album was released, there was no doubt that it was going to be incredible, as Ed is one of the main songwriters for Reverend. His set was made up purely of solo material, and although I think a few were hoping for a solo rendition of some Reverend tracks, the crowd lapped up the set and were primed and ready for the headline act. 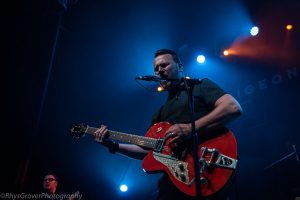 As the stage fell into darkness, The Pigeon Detectives took their places on stage as Matt Bowman burst onto the stage to a huge cheer and got the crowd amped up ready for a night of bouncing, dancing and singing at the top of their voices. Opening with ‘Romantic Type’, the crowd went crazy and played straight into the hands of Bowman, who works excellently of the energy from the crowd. Straight from the off, pints and water bottles were making their way through the air, with the odd decent throw managing to make it onto the stage. Bowman soon retaliated, with his signature water sprays and it’s safe to say soaked not only the crowd but myself and the other photographers in the pit below.

It’s over a decade since Pigeon Detectives burst onto the scene with their debut album, ‘Wait For Me’ was released, and nearly 20 years since the band formed, since then they have remained a mainstay amongst indie crowds, and are currently seeing a revival in their popularity, having played incredible sets at festivals over the past few years, as well as their own fantastic headline gigs. It was 2017 when the band last released an album, but the band did tell the crowd last night they are back in the studio for album number six!

Their set was made up of incredible singalong anthems, and their biggest hits were scattered throughout the set, opening with ‘Romantic Type’ and ‘I Found Out’ also made an early appearance, ‘This Is An Emergency’ took a spot around half way through the set, and one of the last tracks they played was one of their biggest, ‘Take Her Back’. It is safe to say that the crowd erupted for the latter of those tracks, and it’s a wonder that there was any beer left behind the bar, as it had been flying across the crowd throughout the night. Even after the first three tracks when I was walking through the crowd to get a good spot to watch the rest of the set, the floor was swimming with the pints which had been spilled in the opening numbers.

Whether you know their entire back catalogue, or just know their big tracks, it’s always worth trying to get down to see Pigeon Detectives, because they’re easily one of the most energetic and captivating live bands around, but if you don’t want to get dowsed in water, I’d recommend standing a way back from the barrier!