The perfect way for many fans to end their year of live music, and nobody was going to hold back

The curtain raiser for the evening were Lottery Winners. Back in the north west after a lengthy tour in support of Shed Seven, it was great to see them receive a warm welcome from a healthy crowd of fans who had made the effort to get to the venue early and show their support. Within a song or two, the venue had began to fill up even more and the support that the crowd were showing the band was clearly well received. Frontman Tom was visibly moved by the fact that a room full of people who had come to watch Shed Seven were belting out choruses to the songs himself and his band had written. Seeing Lottery Winners get this much support was truly incredible, and rather special to see. 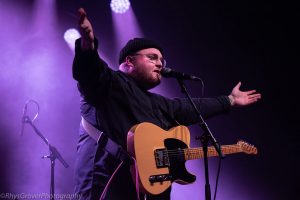 As always with Shed Seven, the crowd knew they were in for a constant barrage of anthemic indie choruses, and this was clear from the kick off. Opening with ‘Room In My House’, the venue was bouncing early on, and it was great to hear the ‘woah woah woah’ and ‘yeah yeah yeah’ chants being screamed in the direction of the strutting and ever present Rick Witter. It’s the perfect set opener for the band, and it’s really good to see a track which was only released 4 years ago already becoming a favourite amongst their loyal and adoring fan base. Not only is this the perfect opener to warm up the crowd, but it’s littered with perfect opportunities for the band to really get into their groove and find their feet on stage for the night. Expressive guitars, driving basslines and bouncing drums are the perfect opener for any band, and when you have a frontman as incredible as Witter, you can really let yourself go.

The band flowed directly into ‘Casino Girl’, after which Witter addressed and thanked the crowd, who had come out just days before Christmas to show their support for the Indie giants. It was in this break that Witter took the opportunity to wish a girl who was front and centre of the crowd a happy 9th birthday. A lovely gesture, but the girl didn’t think to, as she burst into tears with what I can only assume was sheer embarrassment. Fair play to Witter, who swiftly moved on and made light of the situation in the nicest way possible. 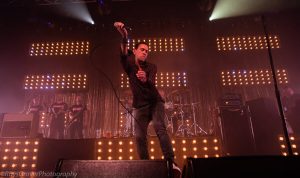 Now the ice had been broken, the band really set the groove for the night. They were playing off the back of the energy from the crowd magnificently, and as Witter strutted around the stage backed by the rest of the band, it was clear they had more than found their feet on this, the closing night (for now) of their current UK tour. I say ‘for now’, as unfortunately some of the dates were postponed, so have been rescheduled for 2022. Whilst it may not have been the ideal situation for fans who had tickets, it gives them something to look forward to for 2022, and I couldn’t think of a better gig, because it will be more than worth the wait.

Throughout the night, the entire band were on more than top form, and watching them close their incredible set with a string of their biggest tracks was something quite magical. I have seen the band perform live previously, but never their own headline gig, and I’m glad I’ve finally managed to catch them, because it was for sure one of the gig highlights of the year for myself. Shed Seven are still a band at the top of their game.