Soft Cell are a band that have been a part of musical history now since the early 80s, so getting to see a band that have kept their mojo for the past 40 years and are still hailed as icons of their genre is truly an honour. It’s even better that I get to see Marc Almond and David Ball perform one of their best albums, ‘Non Stop Erotic Cabaret’ as it’s 40 years since the release, and this short tour is not only a celebration of that album, but a celebration of their incredible career, as well as a chance to debut their forthcoming album, which will be their first in 20 years.

The tour kicked off in Glasgow on 10th November, and tonight was the chance for the people of Manchester to pile into Manchester Apollo. An iconic venue being paired with an iconic band always creates a special atmosphere and makes for a memorable night, tonight was no different.

A DJ warmed up the crowd as they took their seats in the Apollo, and the venue was filling up at a steady rate, but when the music stopped, and the lights went out, there was a surge of eager fans all taking to their seats, and the empty seats were soon filled. A big cheer welcomed Almond and Ball to the stage, who are being joined by three fantastic backing singers to help fill out the sound and achieve a near exact sound to what you hear when you listen to the album which they are celebrating. 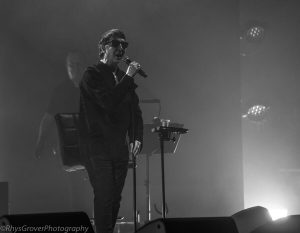 The night was opened with ‘Torch’ and that was followed with ‘Bruises On All My Illusions’. Both of these tracks, and the next few that followed were selections from the duo’s forthcoming album ‘*Happiness Is Not Included’, and although the audience had never heard these tracks, they still offered a warm reception to the material, and were soon singing along to the choruses of each track.

The set was split into two halves, both an equal mix of greatest hits, new material and everything in between, but it was in the second half where things got a bit more lively, as they performed what is possibly their biggest track, ‘Tainted Love’. It was at this moment you realise that Almond still has, and probably always will have the same abilities and energy to deliver a performance not too dissimilar from what he was delivering in the duo’s heyday. The sound all night had been incredible, with the visuals to match, but the quality truly was highlighted when they performed the Gloria Jones cover.

Soft Cell rose to the height of their fame in the early 80s and even now, 40 years on, they still deliver a memorable set, and still sound fantastic. It’s great to see them back on the road, and I wait with baited breath to hear the album which will release in Spring 2022.