Skip to content
Live: The Charlatans At Victoria Warehouse

I struggle to remember the last time I attended a gig at Victoria Warehouse where it wasn’t raining, although it is Manchester after all, so it’s no surprise. I think the rain had put some people off initially, as the venue was sparse early on, but by the time the support took to the stage, there was a healthy crowd gathered and eager for the night to unfold.

Support was delivered by Martin Carr & What Future, who have been the support for the majority of the tour, and they received a warm welcome. I hadn’t heard of them before, but the three piece band delivered a short but catchy set of warm indie music, the perfect support for a band like The Charlatans. Not much time was taken in between tracks for any crowd interaction, but that’s not always a bad thing, and the band were using their short set effectively and delivering as much music as possible in the time they were given. 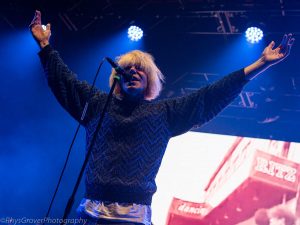 The support finished at about 8.15, and it was a quick half hour until The Charlatans were ready to deliver exactly what they’ve delivered for the last 31 years, a stunning set which included some lesser know material as well as their obvious and well know singalong anthems. They opened the night with ‘Forever’, and an array of visual throwbacks darted across the screen behind the band as they charged through the song. Pictures from their early days, thrown in with collages of backstage passes and photos of some of their 90’s indie counterparts showed just exactly what The Charlatans have achieved in just over 3 decades of making and releasing music.

Throughout the night, they played tracks off near enough every album they’ve released, managing to include tracks from 10 out of their 13 albums, and in amongst those were of course their biggest tracks, with the likes of ‘One To Another’, ‘The Only One I Know’ and ‘North Country Boy’ all taking a spot in the setlist, which is no surprise really, as they constantly receive a good reception. Tracks such as ‘Weirdo’, ‘You’re So Pretty – We’re So Pretty’ and ‘Plastic Machinery’ also made their way into the 21 track setlist.

I had been wanting to catch The Charlatans for a while, having only previously seen Tim Burgess performing solo, and I have to say, it was worth the wait to see a band who are a key part of England’s incredible indie music history.