Just off Oxford Road, Deaf Institute is one of Manchester’s finest venues, and for this night, it was playing host to some of the finest rising talent as Tigercub brought their tour to Manchester. They also brought Bad Nerves along with them, who opened the night in ferocious style.

Bad Nerves are a five piece band, and the stage at Deaf Institute is barely big enough for a 3 piece, never mind a high energy five piece, which lead to the swaggering frontman taking his mic into the crowd and performing from the floor, occasionally climbing back onto the stage to dive off into the bouncing crowd. The frontman spreading out into the crowd allowed the rest of the band a little more space, and therefore more space to throw themselves around the stage. I hadn’t heard of the band before I arrived at the venue, but I would safely say that many people will be hearing about this band soon, as they are sure to take their incredible high energy performances to bigger stages. 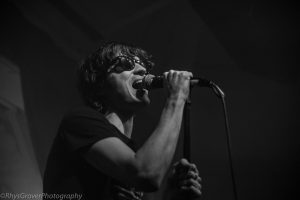 After their decent length set, the stage is quickly stripped and relaid for Tigercub. Being a three piece, they could spread out around the stage a little bit more, and this meant they could throw themselves and their instruments around the stage. It’s been a while since I have been in a small capacity venue, and I must say, I have missed it massively. Mosh pits formed early on, and the floor was bouncing beneath the feet of the crowd.

The band ploughed through their set, taking frequent breaks to make sure everyone in the crowd was safe as they bounced away. Tigercub have been on my radar for a few months, and it was incredible to finally get to see them live, and seeing them live makes it really clear why they had recently supported Royal Blood on some intimate shows.

If you’re looking for a new band to listen to, then there were two incredible bands performing tonight, both of which deserve the attention of everyone.