‘Queensway Tunnel’ is the beginning of something special for Zuzu

Sheltering from the Manchester rain, Zuzu’s fans piled into the iconic Deaf Institute and were eager to hear the debut album for the first time. ‘Queensway Tunnel’ was announced in Summer, and finally released last month, so the wait hasn’t been all that long to hear the album, nor was it a long wait to get to see the album performed live, and Zuzu did not disappoint.

Zuzu had formed the setlist to be a relatively balanced set, with tracks off the debut album intertwined with some of her older material which she released before the album came to fruition. Fans were happy to hear the older tracks, and they were equally happy to get to watch the fierce woman perform the songs which have no doubt been key features of playlists for the last month or so.

If you haven’t seen Zuzu live, she’s definitely worth going to see. She has a distinct image on stage, with attitude and swagger along with incredible vocal delivery. Watching her perform is a special thing to witness, and you do get the feeling that performances in small venues will be just a small stepping stone, and it won’t be all that long before her tours span out to bigger venues. 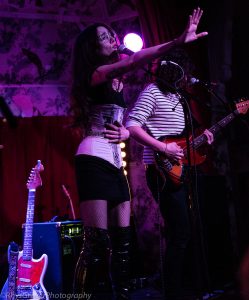 Her songs tell tales which many of her fans will be able to relate to, and her songwriting style isn’t too dissimilar from the likes of Lily Allen or Kate Nash, which is a style that is becoming more popular amongst the upcoming music scenes. Having music of this style, and having fierce and talented women coming to the forefront of the industry is something which is long overdue, and something we need even more of.

Tracks such as ‘Lie To Myself’, ‘Skin & Bone’ and ‘Never Again’ were just a trio of the tracks which boosted the incredible atmosphere, but it’s safe to say that the energy levels were at a high throughout the night, and it’s so good to see any artists getting such overwhelming support so quickly after the release of a debut album.