A Perfect Start To His Trio Of Gigs

Seeing Johnny Marr in such a small venue was a sight to behold!

An already relatively warm Monday night was about to get a lot warmer for fans of Johnny Marr, as they packed into the lower realms of University Of Leeds’ Student Union, into a venue called Stylus. If you haven’t been there yet, then be sure to get there soon, because it is one of the best small venues you will find, and it’s pretty special when a musician with a music history like Marr’s steps onto the stage. As if the night wasn’t special enough with it being Marr’s first gig in around 2 years, there was an extra member to the band, in the form of a new keys player!

Opening with ‘Hideaway Girl’, fans were ecstatic to see the Smiths guitarist take to the stage and be straight back in form despite the time away from the stage, and they were even happier when he powered into ‘Panic’ for his second track. A fitting track for early on in the night, with Leeds being a key focus in the lyrics of that track! It’s been a very long time for me since I have seen a venue of such a small size have a crowd within where every member is belting out the song, and to witness it as Marr and co. blasted out ‘Panic’ was a moment to remember.

Marr was out with the aim to please, and it was track three where he unleashed his latest track ‘Spirit, Power and Soul’ onto the eager crowd. Having been released only a few weeks ago, it was surprising to see the incredible reception it got and it bodes well for Marr, as the track will feature on his upcoming double album ‘Fever Dreams Pts 1-4’ which will hit shelves in October. 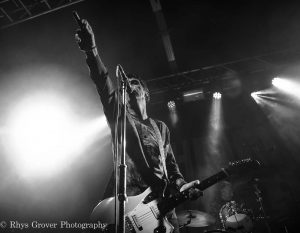 It’s safe to say that Johnny Marr is one of the most esteemed musicians still touring, and his set tonight was the perfect summary of everything which he has done. Tracks pulled from his solo albums featured heavily, with the odd track from his time as part of Electronic thrown in for good measure, however he knows that people have come to see him perform a few tracks from his incredible time with The Smiths, and he did not disappoint. The set was made up mostly of tracks with incredible guitar parts, such as ‘Bigmouth Strikes Again’, ‘How Soon Is Now?’, ‘Some Girls Are Bigger Than Others’ and even a cheeky helping of ‘Headmaster Ritual’. To see him wield the guitar whilst performing these tracks really is something truly special, and you really have to see it for yourself to appreciate just how clever it is.

It was a sweaty night in a fantastic venue, with one of the most talented musicians you’ll ever see, and for me, it’s incredible to have nights like these. If you are offered tickets for one of the Blackburn or London shows this week, then snap them up and get yourself into a tiny venue with a guitar god, or if you prefer the bigger, less sweaty stages, get down to Old Trafford Cricket Ground on Sunday, where he is supporting the mighty Courteeners!