Kaiser Chiefs Were There As Part Of Sounds Of The City!

The Kaiser Chiefs close out their current tour at Castlefield Bowl, with support from Razorlight and the now expanded local favourites PINS.

After having schedules moved, cancelled events in doubt, Sounds of the City is back in full flow, although slightly later than usual, it was with great excitement to see so many people turning out for what was a stellar line up.

As the newly expanded PINS took to the stage there was a great amount of people who had turned up early enough to catch Manchester, s homegrown talent PINS. They deliver a confident and powerful performance, no doubt adding to the already growing army of fans, that have the band singled out for great things in the future. 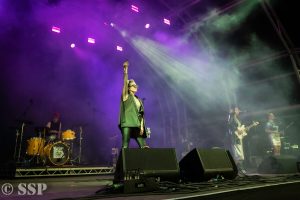 Johnny Burrell takes to the stage with his band Razorlight, to a warm welcome who are certainly out in force, on a school night. Burrell looked fresh faced and charged up for a rousing set. A mixture of old and new was lapped up by the growing crowd, all rolling back the years, “In the Morning”, “Before I fall to pieces”, along with “I can’t stop this feeling I got”. Certainly, see the band at its best, in a set that included the floor filler “Golden touch” and the crowd favourite “America”. Razorlight have returned to form, there was a great repour with the crowd, with Burrell pledging his love for the venue, and I would agree it truly is an excellent venue, Razorlight set up the crowd for the headline act.

By the time tonight’s main act, The Kaiser Chiefs take to the stage, all traces of daylight have disappeared into the night sky. This would be the bands grand finale of the current tour; from the outset it was clear they wanted to go out with a bang. One of the features of a Chiefs gig is the crowd and band interaction, with a frontman like Ricky Wilson they have a master at work, form the second he comes on stage until the last note of the last song, Wilson works the crowd to maximum effect. “Never miss a beat”, “Na na na na naa” and “The factory gates “, set the ball rolling, the band are relaxed in full flow and Wilson commands the stage and any box he can find to climb on for good measure. 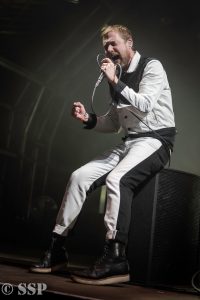 As would be expected “Every day I Love You Less” has a great reception as does “I Predict A Riot” and “Ruby” which had band and crowd in full party mode. A fantastic cover of “Pinball Wizard”, goes down well. “Angry mob”, ended the set. As the band come back for an explosive encore, with “Hole In My Soul” finishing with “Oh My God”, along with the pyrotechnics and a crowd that came to shake the shackles of the last eighteen months.

If you have not managed to catch an evening at the Castlefield Bowl, at one of The Sounds of the City events you really are missing out on a great night.