Skip to content
Review: King No One Live In Manchester

Closing out a triumphant and well attended tour.

One thing that has become immediately evident, King No-One have developed and grown from when I first had the pleasure of stumbling across them on the Viola Beach stage at Neighbourhood Weekender festival.

They carry a confident and cool persona within their performance, immediately engaging with the crowd of loyal and supportive fans. frontman Zach Lount sets out his immediate communication of the crowd and stage.

King No-One have evolved a set that brings you through a blend of rich rock edged anthems, then doubling back into a more gentle indie feel, as well as being able to gel together a sound that is now defining where they are heading, they have the prowess and the power within the performance to deliver what they have to a much larger audience. 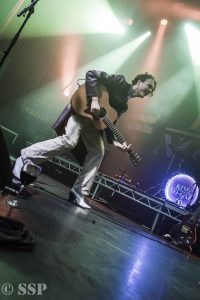 Beginning with “Obsolete” and “Toxic Love”. Great guitar driven riffs and a real Jazz funk feel to the set see airings of “Apologies” and the fantastic “Halo” before an acoustic version of “Systematic”.

The Band are cutting loose and have thrown off the shackles, to bring this run to a powerful crescendo.

There is a real down to earth connection between frontman Lount and a warm crowd, something about how he covers the stage with a propre air of confidence, may I say Bowie esque.

As expected, it was the band’s arguably most known single “Antichrist” was the closing number a chance for a mass singalong and a final thank you from the band on what has been a great finale to the tour.

King No-One have managed to carve out a unique way of adapting their music to various stages, building on a solid fan base, as they head off for a well-deserved rest and a chance to gather their thoughts for the next step. As this curtain closes let’s hope its not too long before we see them bring us the next phase.