Finally throwing off the shackles of an enforced, eighteen months lockout, due to the Covid pandemic. Nick Cave and his fellow Bad Seed, Warren Ellis seemed took to be on stage at the Bridgewater Hall Manchester last night, performing a set that sees their first tour as a duo.

The tour is a visual and holistic insight into, Nick Caves collaboration, with fellow bad seed WARREN Ellis, latest work. “Carnage”. I think it is fair to say that the album lives up to its name. There was something enigmatic about the way the pair would perform the tracks. Watching Cave cover the stage, whilst delivering the emphatic track “Hand of God”, it was like watching a preacher in full gospel sermon. The shouts and screams of Nick, Warren and the back-up trio were raw and at times descended into tribal chants. Culminating with Cave crouching on the edge of the stage whispering the lyric over and over like a maelstrom of energy whilst reaching out to the responsive hands of the front rows. 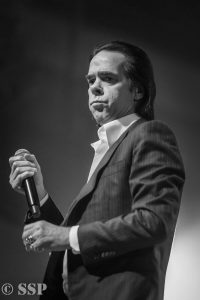 Other fabulous treats come in the form of a wonderful paired down cover of the T Rex classic “Cosmic Dancer”, “Push the Sky Away” monumental apex, the rather splendid “Higgs Boson Blues”, Along with the oh so greatly underrated Grinderman number “Palaces of Montezuma”. It has been way too long for a lot of these devoted fans to finally get a chance to come out and worship at the feet of their idol.

The crowd where begging for more as Cave left the stage at the end of the set, coming out to play not one but two encores. All this was lapped up by a crowd that seemed so grateful to be in the presence of a genuine performer.

If you have never had the pleasure of being at a Nick Cave performance, I can tell you first-hand it’s a rollercoaster of emotions of epic proportions, dark, mesmerising, totally indulgent, deep and bullish lyrics, delivered and performed by an artist who you feel could conjure up the dark side.

Nick Cave and Warren Ellis are a tour de force, reaching straight into your mind while tearing out your heart strings.