Continuing The Incredible Sounds Of The City 2021!

Things were kicked off in great fashion by The Skints, a reggae band with a few other genres thrown in for good measure. Despite only being a four piece, the layers and instrumentation would suggest they had a lot more members, and a lot of the extra work was under taken by the lead singer with the use of samples, drum machines, whilst she also played keys, sax and at one point, a flute. Reggae isn’t really my thing usually, but watching these perform was uplifting. They were bright and cheery, getting the crowd dancing and keeping spirits high, as it wasn’t the warmest night to be stood in the centre of Manchester watching an outdoor performance, but at least the rain held off!

Paul Heaton and Jacqui Abbot came onto the stage at around 8.45, accompanied by a backing band and welcomed by an enormous roar from the crowd, some of who had been there since the gates opened at 6pm! You could tell right from the off that Paul and Jacqui were so glad to be back performing in front of a crowd in Manchester, and finally getting to perform their latest album, ‘Manchester Calling’ in the shadows of Beetham Tower, which features on the front cover of the album. They opened the set with a track off their album which came out last year, ‘The Only Exercise I Get Is You’, and it was great to hear the crowd singing along word for word, which I suppose is a bonus of having to have delayed the tour due to the pandemic. 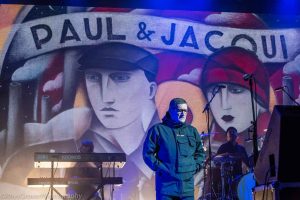 There were a handful of songs from their latest album sprinkled through the set, along with some tracks off their albums since forming as a duo, but most of the night was made up of tracks from their time with The Housemartins and The Beautiful South. The thing is though, each and every track got a great reception, whether it be old or new, and I think that’s what made the night so special. Seeing fans living in the moment, enjoying the set and letting off some steam. They left the majority of their big tracks til nearer the end, with ‘Happy Hour’ making an appearance as the second to last song before the band left the stage. Coming back for an encore, fans were then treated to the fantastic ‘Perfect 10’ and the band let the stage, but fans wanted more, and so Paul and Jacqui did something you don’t see top often.

Coming back on stage for encore two, they delivered incredible versions of ‘Caravan Of Love’ and ‘Good As Gold (Stupid As Mud)’ and it rounded off the night beautifully! The Manchester sky had looked like it was going to live up to standard and deliver some rain, but it had held off all night. The atmosphere was at a constant high all night, and it’s just so good to see around 8,500 people back in Castlefield Bowl for incredible nights of live music as part of Sounds Of The City!

The Only Exercise I Get is You
Five Get Over Excited
Old Red Eyes Is Back
I Gotta Praise
I Smell Winter
Rotterdam (Or Anywhere)
I Don’t See Them
Poems
Everybody’s Talkin’
(Fred Neil cover)
Play Video
She Got The Garden
Prettiest Eyes
A Good Day is Hard to Find
D.I.Y.
Dumb
Manchester
Heatongrad
Song for Whoever
Don’t Marry Her
A Little Time
Play Video
Happy Hour
You Keep It All In
Encore:
I’ll Sail This Ship Alone
Perfect Ten
Encore 2:
Caravan of Love
Good as Gold (Stupid as Mud)