A Hot And Sweaty Night In Academy 2

After a day where Manchester had been baking in the sun, packing into a relatively small venue might not be everyones idea of a good night, however if it’s to watch a band as good as Teenage Fanclub, then it sounds like a good way to spend a night to me, no matter what the weather. I got down early, as I was eager to be back inside a proper music venue for the first time since March 2020.

Supporting the band were a duo called Group Listening, and it definitely not the sort of support I was expecting for Teenage Fanclub. They are a clarinet/keyboard duo, and delivered a quite relaxing set of tracks off their upcoming album. Their set was music of an acquired taste, which isn’t necessarily a bad thing, and the small crowd which had got down to the venue early seemed to enjoy the short set which they performed. If you are into that sort of music, then check them out, as there was no questioning they knew their way around their instruments.

Teenage Fanclub came on stage at dead on 9pm, and straight from the off, the dad dancing was in full swing, and it seemed to be contagious. Whether the band or the crowd started the spread I’m not sure, but every time I looked into the crowd, more and more people seemed to be cracking out the dance moves usually reserved for weddings. Throughout their set, the band kept a healthy balance of old and new. 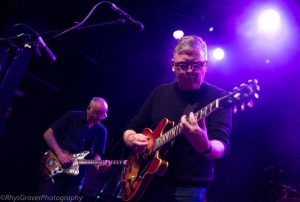 Only a few tracks off their latest album, ‘Endless Arcade’ made it into the set list, which was good for those in the crowd who were yet to totally familiarise theirselves with the latest offering. It’s fair to say though that Teenage Fanclub don’t have a shortage of other material they can play, having been around since 1989 and having now released 11 studio albums, as well as two compilations. They managed to squeeze in tracks off most of their albums, so fans had a night of fantastic music which spanned the career of the band. It’s always good to see a band be able to play something from most, if not all, of their albums, as everyone has a favourite album, and it keeps everyone happy.

Fans were also treated to a 3 track encore, consisting of; ‘The Fall’, ‘The Sun Won’t Shine On Me’, and ‘Everything Flows’. Which again, is a career spanning encore, with something from the start, the middle and the latest album all managing to make their way onto the closing moments of a fantastic night,