Skip to content
Review: Snow Patrol Close Out Sounds Of The City 2021

It’s the last evening for this years Sounds of the City at Manchester’s Castlefield Bowl, what a way of going out, as we welcome Snow patrol to bring the curtain down.

Its always great to see new and emerging artists, getting the chance to open for such headliners. Opening tonight is Lucy Blue, who originated from Dublin, Blue has a great stage presence and was more than comfortable with the growing crowd, “See You Later”, “Your Brother’s Friend”, plus songs from her EP “Fishbowl”, where warmly received by the crowd. 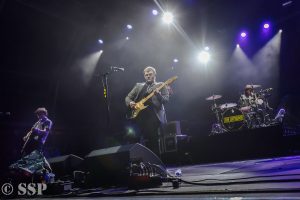 Next to grace the stage are The Lathums, from just up the road in Wigan, as their popularity soars, I have no doubt that they will be brought into the Manchester music fold. They are on course to be a force on the music scene. The Lathums are a four-piece British indie pop band. The band consists of four members Alex Moore, Scott Concepcion, Johnny Cunliffe, and Ryan Durrans. Already packing out venues, they have a great wealth of musical prowess, for such a young band, and that says it all about these lads, influences of Arctic Monkeys, Alex Moore’s voice is so varied, tones of Morrissey (can only be a positive thing). They delivered a set that I think most people who had never heard or seen them before, went away to search and find out more about who they are. “How Beautiful Life Can Be?”, is a standout rack as is “I See Your Ghost”. As the band leave Alex on stage for a mini solo set his opening song of “I’ll Never Forget The Time I Spent With You”, brought a tear to a few people, there’s a depth and maturity to Alex’s voice that makes him stand out. The band finished there set with “Artificial Screens”, with dirty and filthy guitar riffs you cannot help but immerse yourself in. 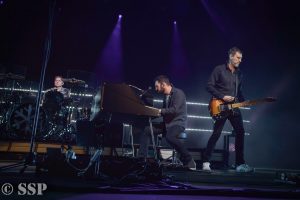 Snow Patrol take to the stage and immediately launch into “Chocolate”, well if you’re going to bring the curtain down you may as well get off to a flyer. Gary Lightbody seems so pleased to be out in front of the crowd and is bounding the stage as the band power up the next couple of tracks. Lightbody dedicates an emotional tribute to Steve Strange who has sadly passed away, as they played “Run” it was a very fitting and poignant moment.

There is a definite warmth coming from the band everything is neat precise and on cue, the depth of songs the band have amassed over the years seems to roll off hit after hit. “Make This Last Forever”, “The Lightning Strike” along with “Chasing Cars”, become a sing fest. This has the feel 0f a band in its element and a crowd who are in awe of master of musical journeys. With possibly the quickest turn around for the encore, the band reassemble for “What If This All The Love You Ever Get?”, before finally bring down the curtain with “Just Say Yes”. As the fans depart and disperse into the night sky, my thoughts are already looking forward to next years offerings for Sounds of the City.