Skip to content
Live: The Hunna At Manchester Apollo

The Hunna Let The Fireworks Fly At Manchester Apollo

The Hunna bring energy and finesse only a band a band in complete control can deliver to a packed Manchester Apollo.

The opening support act for the night is self-proclaimed rebel Kelsey Karter. Her set was full on, backed by a band that seemed to elevate a rather enthusiastic Karter. The set was full of high energy, hands waving crowd participation, with great poise and storytelling. Karter lit the fuse on tonight’s proceedings. “God Knows I Tried”, brought the tempo down on a song Karter relays to the audience about climbing trees, a very personal and beautiful song.

Tonight’s main support are a band I have been hearing good things about, so it is with great anticipation that I look forward to their performance. Coming on to a rather darkened stage, and immediately acknowledging to the crowd that this is the biggest stage and the largest crowd they have performed for. Idolising Nova are Jack Fulton Smith and Kyle O’Sullivan, an indie pop duo from Peterborough, UK. They are instantly a very likable band with clever lyrics, great sounding riffs and melodies that have you hooked from the start. It’s easy to see why they are so revered by many bands, tones of Catfish and the Bottlemen as well as The 1975 are evidently present. I look forward to watching their journey over the next year or so. 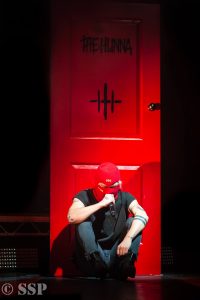 As the drone of sound for “One Hell of a Gory Story” builds from the set, a red spotlight illuminates a red door assembled on the stage. Wearing a red balaclava, the front man is sat in front of the door and the opening rap to the song is forcefully let loose on to the heaving crowd.

For those that are not sure who The Hunna are, it’s not difficult to put them in place.  They’re firmly based within the depths of rock. Think Kings of Leon, Foals and with You Me At Six, musically powerful, lyrically hard and on trend with a delivery that only bands of the highest quality can deliver at ease. 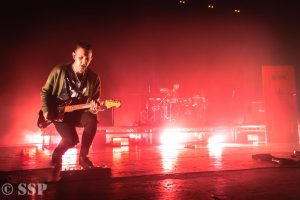 Having previously watched them perform, the shackles of finding their feet have certainly been removed, they have more of a structured style and stage presence, at times you are dragged all over the stage as the band are always on the move. “Anything Is Better Than Nothing” and the sublime and beautiful version of “Sycamore Tree”, really do showcase what a band they have become. 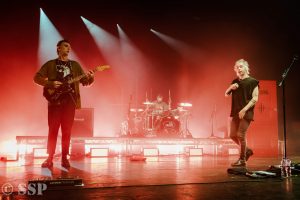 Front man Ryan Potter is a powerhouse of a performer, old school front man, Daltrey and Mercury combined, with a vocal range to match. “Bonfire” is a rather apt song for tonight one that allows the rest of the band continue their high tempo performance, “I would rather die than let you in”, brings the set to a close. As the band return to a rapturous crowd and open with “Dare”, followed by “Can’t break what’s broken”, finally leaving the crowd with the “She’s Casual”. As they leave the stage to ear shattering applause and maybe a well-deserved drink or too, a chance to draw breath was gratefully taken by band and fans alike.

With the Hunna, rock music is in good hands, live music lives on and the days of a proper performing band is assured.