James And The Cold Gun, Bleak Soul and Swears

As the sun starts it’s cool down and the sky’s blue hue deepens the spirited Northern Quarter venue, Gulliver’s is already busy. The usual lone drinkers languish at the bar sipping their drinks, while small groups of friends fill the booth animatedly chatting. Slowly, bodies snake their way through the scene upstairs to the venue’s live room.

Swears provide something of a musical buzz live. With layers of cataclysmic rhythms, squealing guitars and an echoing melody; you will be searching for a comparative hook on which to hang your opinion. Yet, where you hear that ‘new wave of British heavy metal’ sound of the late 70’s it’ll immediately morph into anxiety led gungy punk feel by way of some urgent new wave vibrations. We got a taster of things to come with I.D the band’s latest single, due for release next week, another fresh cut of a multi-layered rock sounds. Ultimately, Swears deliver a skilled set with enough raw edges to make it interesting and engaging.

We are genuinely being spoiled with this line-up tonight. Benjamin Langford-Biss aka Bleak Soul really is a spellbinding artist. While riveting it is impossible not to take onboard the heart-wrenching qualities of many tracks. With themes of fear, sadness, and mental health trauma it would be easy for this to be a wallow in company kind of set. However, there is both a purgative quality and constructive optimism in play too. Fundamentally engaging and energising Bleak Soul close out their compelling set, with Mundane, USA the audience committedly participating and finishing with appreciative applause and cheers.

In the short space of time since the post lockdown return of live performances, James And The Cold Gun has established the Kate Bush track of the same name as their entrance song. As Kate trills the final line “James, are you selling your soul to a cold gun?” the audience applauds as James Biss, James Joseph and their current touring rhythm section walk on the stage.

Opening with Seven – the first track on their recently released first EP; False Start, the band are making a proclamation and it is a noisy one. With a flood of ferocious guitar riffs and brutally hammered out drums JATCG immediately leaving hearts pounding with anticipation. It’s Mutual showcases the synergetic nature of the band with The Biss and Joseph duetting throughout the track adding cracking vocal dimensions.

Lyrically, JATCG deliver a perspective regarding the pursuit and the pitfalls experienced in the pursuit of happiness. Yet the set doesn’t feel polemic nor simply just about life’s toxicity but more often about empowerment, inclusivity, and raw honesty. Think garage-rock with less high school angst, and antagonistic tropes, while, retaining the energy and high kicks.

Closing out with, Long Way Home a quintessential anthemic live single that provides all you need to round out a show. Aggressively bold and cathartic with an enthusiastic and animated hook and perfect sing-along refrains.

Surprising as it may be at times, JATCG, is currently a duo creating this thunderous musical storm. One that illuminates with white flashes of melody. roaring reverb and an explosive cacophony of guitars. South Wales loudest? No arguments here, however, James And The Cold Gun are more than simply noise: compellingly exuberant, electrifying vivid and this is just the start.

Keep up to date with all James And The Cold Gun releases, news and tours via their official website, Facebook page and Twitter from where they tweet as @andthecoldgun_. The tour continues on 11 May 2022 in Brighton at Hope and Ruin tickets available from the usual retailers and via this link. 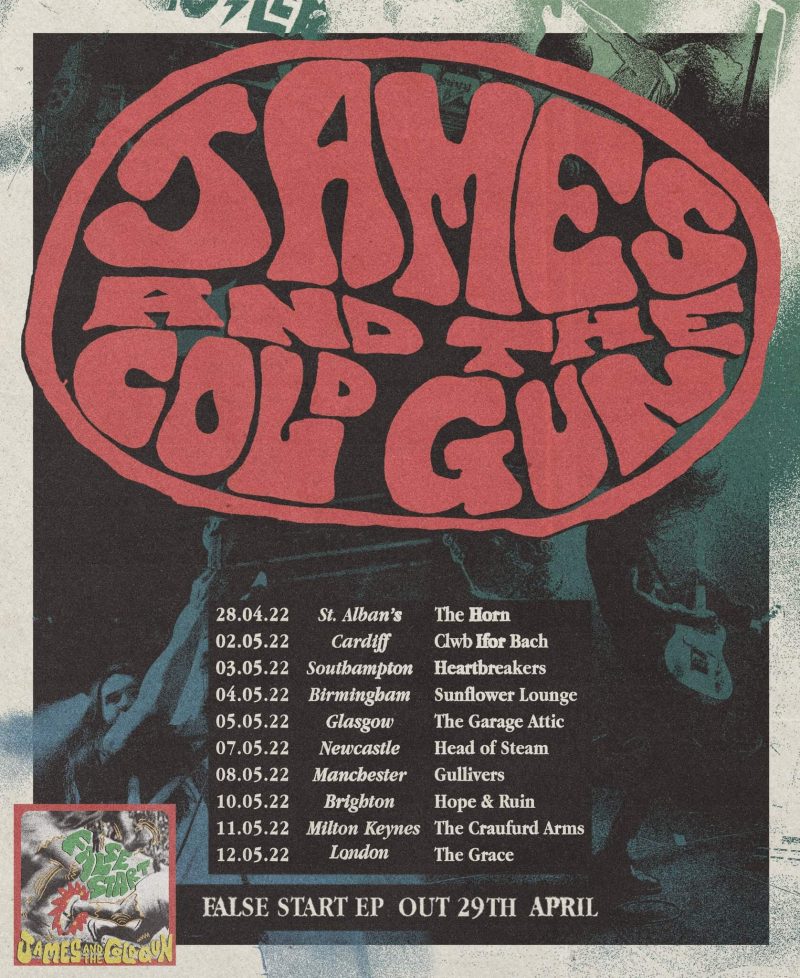