The Genre Bending Ensemble Tore The Roof Off O2 ritz

Who’d have thought Acid House and Country Music would work so well when fused together?

Alabama 3 are most known for their hit single ‘Woke Up This Morning’, which was used as the opening theme for hit TV show, The Sopranos. They built their reputation and a name for themselves by creating a style of genre bending music that hadn’t really been done before. Alabama 3 alternate between their country/blues music roots, and their love for hip hop and acid house throughout their set, creating an atmosphere that very few bands would manage to recreate. To top off their quirky music, the harmonica player in the band is the son of the man behind The Great Train Robbery.

Their set is kicked off by one of their backing singers/dancers picking up a guitar, and proceeding to tear through the fretboard. It’s like watching Jimi Hendrix, as the notes wail through the speakers in a hypnotic way, Eze leans on the tremolo bar, making the notes dance even more. Slowly, each member joins her on stage, jamming amongst themselves until everyone is in place. As a recorded vocal track from ex-frontman The Very Reverend D.Wayne Love (who sadly died back in 2019 after illness) plays over the band, new frontman Larry Love takes his place centre stage, ready to deliver an incredibly energetic set. 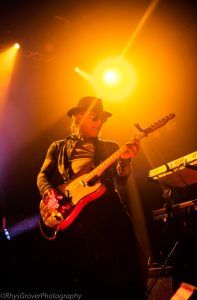 Alabama 3 are made up of 9 members, all of whom fully embrace the vibe of the band. Donning Nashville style outfits, and strutting around the stage in full control. Their set opened with ‘Tranquilize Yourself Britannia’, a track from their latest album ‘Step 13’, which was released last year as their first since they lost Jake Black in 2019. This tour in support of the release of that album, and the first track ‘Whacked’ was the second song for the night.

‘Hello… I’m Johnny Cash’ followed as the third track of the night, and was very well received from the crowd. This track is the perfect track for any new fans of the band, it sums up the music which this band craft perfectly. A handful of tracks from their latest album followed, before their biggest hit took its place on the setlist. ‘Woke Up This Morning’ is the song that have defined this band for years, and helped them rise to the level they are at now. 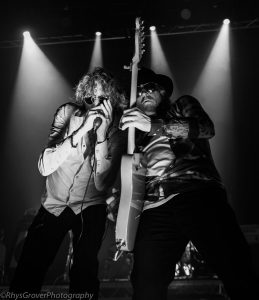 ‘Have You Seen Bruce Richard Reynolds’ followed, and it’s this track where the harmonica player takes his spot on centre stage to perform the song which the band wrote about his father, Bruce Reynolds, the mastermind of The Great Train Robbery. Nick Reynolds (aka Harpo Strangelove) alternates throughout the track between the lead vocal and smashing out riffs on his harmonica, with the whole song performed through the one harmonica mic, offering the vocals an eerie twist, a technique which Jack White has adopted in recent years.

‘You Don’t Danse 2 Tekno Anymore’ was a hit track off their debut alum ‘Exhile on Coldharbour Lane, and it was an equal hit when the band performed it last night. A good selection of back catalogue tracks followed on to close the performance, with ‘Hypo Full Of Love (The 12 Step Plan)’ closing the main portion of the set. The band performed a two track encore, formed of ‘Too Sick To Pray’ and ‘Road Goes On Forever’ which is a cover of the Robert Earl Keen Jr track from 1989.