The Intimate Performance Was Part Of Independent Venues Week

Independent Venue Week is one of the most important parts of the calendar year for some of the UK’s smaller venues, and with the help of some fantastic musicians, some of the most important venues up and down the country get packed out and get their names back on everybody’s lips. Tonight I went down to Manchester’s historic Night and Day Cafe to witness James Bay smash through a set of the old and new.

It’s pretty surreal getting to see James Bay, a global superstar whose tours usually take him to some of the country’s biggest venues, perform in one of Manchester’s smallest venues, but that’s what Independent Venue’s Week is all about. For anyone who knows the Manchester music scene, they will know how crucial this venue is, but yet it is still often overlooked by some as a go to place to see live music, and I’m pretty sure that after the place was packed from front to back tonight, the venue will have a steady increase in footfall from those who never realised just how special the venue is. 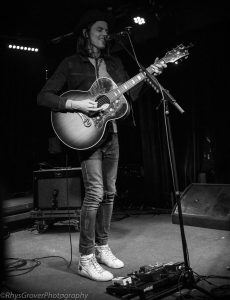 It’s been a couple of years since James Bay has done anything in terms of releasing music or touring, and as is the same with most bands and musicians, his plans were ground to a halt by the pandemic in 2020. Now with the world slowly edging back into normality, it sounds like Bay will be in full swing once again, releasing new music over the next year, and he even teased some festival performances to the crowd. What I love about the more intimate gigs, is how special it is when every single person in the room is singing along to the chorus of a song, and this was the case on numerous occasions throughout the night,

He kicked off the set with ‘Craving’, one of his more well known tracks off his debut album, which is what around half of his setlist consisted of, with the other half being made up of new material, or songs from his really early days before the release of his debut. The new material was incredibly well received, and the energy from the crowd was helping him along, as for this run of dates, he is alone on stage. Tracks such as ‘If You Ever Want To Be In Love’, ‘and ‘Best Fake Smile’ were personal highlights from the night, as the venue became a sea of swaying arms, phone torches and the echoes of a couple of hundred people belting out the fantastically catchy choruses.

It’s not a James Bay set without ‘Hold Back The River’, and this was the perfect number to end the night on. It was the icing on the cake and the cherry on top too. You know you have a gift for songwriting when you don’t even have to sing the majority of your songs, as the crowd are already belting it out louder than you could push the mic, and that’s exactly what James Bay has created. Not just with ‘Hold Back The River’ but with a number of songs from his albums.