James Blunt has recently released his ‘Greatest Hits’ collection, and now that life seems to be easing back into some sort of normality, he has decided to go on tour and bring his career spanning collection of music to his adoring fans. With some of his more recent tracks making appearances such as ‘Bonfire Heart’ twinned with the songs which have been with him since the beginning, with many tracks taking from his incredible album ‘Back To Bedlam’.

It was pretty early on before the lid was blown off with some of his earlier material, with ‘Wisemen’ taking second spot on the set list after ‘Breathe’ made for an incredible opening number. Spirits were high from the off, and James was taking the energy in his stride, cheering along the crowd and despite not being a sell-out show, the volume levels from the off were pretty superb. I missed a couple of tracks as I made my way around the venue to my seat from the photo pit, but thankfully I just got to my seat as ‘Goodbye My Lover’ was ringing out around the incredible arena. 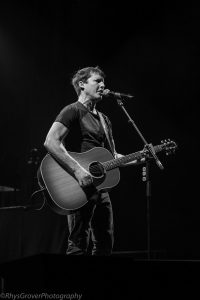 If you haven’t seen James Blunt live, it’s quite a unique experience. Whilst his older, and more popular tracks definitely receive a better reception, you can tell that his fans have connections with each one of his tracks. There’s songs which near enough everyone can relate to, and hearing fans sing along whilst James performed songs about his father was quite the sight to behold.

Spirits were high, and the night was coming to a close, so building on the back of the energy, James and his band charged through a good selection of singalong hits, kicking the run off with a pretty special cover of ‘Coz I Luv You’, which he followed up with ‘You’re Beautiful’, ‘Stay The Night’ and a Cover of Robin Shulz’s ‘OK’. It was at this stage the band said their first goodbyes, before coming back on for a short and sweet encore. The two track encore was made up of ‘Bonfire Heart’ and the closing number of ‘1973’.

I saw James Blunt last time he came to Manchester, and this time round he was even better. A setlist made up of James’ biggest hits is just what was needed to lift the spirits, especially on such a wet and cold day.