Michael Kiwanuka laid out a relaxed set, which had the power and punch of an arena rock gig

It’s been 10 years since Kiwanuka broke onto the sound waves of the world, with his 2012 debut ‘Home Again’ which lit the fuse for his incredible success, from then on, a host of awards and nominations came his way. Numerous Brit award nominations, a Mercury prize award later and Michael Kiwanuka brings his 2019 album on a long awaited visit to Manchester. It was more than worth the wait of around 3 years, and it became one of those shows that you never wanted to end. 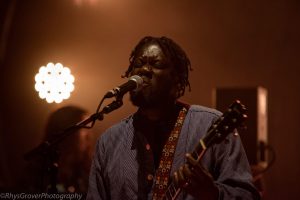 Having never seen Kiwanuka live before, I wasn’t sure what to expect, whether it would just be a dimly lit stage or a bright arena style show, or whether he would be just alone on stage or whether he’d brought the full long. It turned out that he brought enough lights to illuminate a small city, and the full band to deliver one hell of a noise. His music is hard to pinpoint into a single genre, with hints of rock,  jazz, funk and soul, all thrown into the mix for good measure. He’s previously been compared to Frank Zappa and I don’t feel that’s a million miles away.

The set for the night included some of Kiwanuka’s biggest hits, with tracks selected from all three albums. The majority of the set was made up of his latest self titled offering, and throwing in ‘You Ain’t The Problem’ early on truly set the mood for the evening. It was never going to be one of those gigs where you’re dodging pints, but the most iconic venue Manchester has to offer was bouncing from start to finish. Everything about Michael was screaming that he is an incredibly talented musician, with skills that more people should know about, and it’s one thing to do that in the studio, but to do it live, and in the fashion he did it in tonight is something else entirely.

Kiwanuka has been on the radar of music critics and music lovers for his entire career, and just now the fruits of his labour are beginning to come through, and with anymore success like this, it really won’t be all that long until he’s selling out bigger venues. I just hope I’m there to witness it.