The Band Are Currently Touring Their Latest Album

‘Made Of Rain’ is available to purchase now

Founded in London in 1977, The Psychedelic Furs have been making a beautiful noise for around 45 years, with their debut album celebrating its 40th birthday just last month. Since then, the band have grown their following into something quite special, with a real mix of people in amongst the crowds of their live shows, and still managing to draw a fair sized crowd. Their current tour is to support their 2020 album ‘Made Of Rain’, which they are only just getting to deliver to the masses live due to the pandemic.

They kicked off their set with ‘Highwire Days’, and lit the stage up with a stunning array of colour, filling every inch of the stage. There was no introduction from the band, it was purely just straight into the music and the fans seemed to love it. Often it can be hard to gauge the crowd reaction as I’m usually at the front, however the photo pit was out of bounds for the night, so I was in amongst the crowd with the camera, and getting a great sense of the atmosphere. Usually at gigs like this, where the crowd isn’t a large majority of teenagers, there’s a bit more space, but everyone was pushed forward, as if they wanted to be as close to the band as possible. 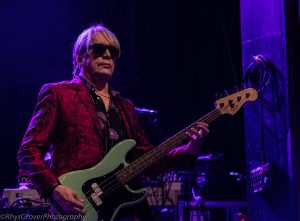 ‘Dumb Waiters’ and ‘You’ll Be Mine’ followed the opener, and by the start of ‘Dumb Waiters’, Richard Butler had found his place and was in full control. Strutting about the stage, each member bouncing off the rest, you just got the sense that it was a tightly ran band and the love for one another was truly something to behold. Despite Richard Butler being 65, he acts on stage like he hasn’t aged a day since the first album, commanding the crowd and throwing hims arms about in a manner not too dissimilar from Morrissey.

In total, the set was made up of about 18 tracks, with a good mix of their back catalogue thrown in with some tracks from their latest offering. Sometimes it can be hard to pick a set list when you’re touring a new album but have such an extensive discography, however I think these have chose well, and the fans seemed to love every minute. There was a terrific energy bouncing around the room throughout, the band were in fine form, and it’s nights like these that are why live music is such a special thing to so many people. There’s a bond between the fans and the band, and very few things are stronger than that bond when everything is smooth sailing.