A Captivating Night Of Live Music

On Friday, St Vincent was ripping things up in Glastonbury, which was a performance I just had to watch, knowing I would be seeing her in Manchester the following day. Her Manchester show delivered just as much energy, and getting to see her doing it in person is something truly mesmerising. She has an aura on stage, her band are tight and are fine musicians, and with every swing of her arm or every note she sings, the crowd are at her mercy. Some bands often get lost in the size of Manchester Academy, St Vincent made it feel like a much smaller venue, she drew the crowd in and you forget you’re in such a vast room as she struts across the stage in her hypnotic manner. 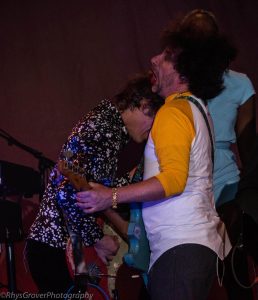 She brought everyone along for the ride too, with the stage bursting at the seams, as she was joined by her incredible band, made up of; three backing singers/dancers, her guitarist, bassist, drummer and keys. St Vincent took centre stage and commanded the band to deliver their very best, and they did just that.

15 tracks formed the main section of the setlist, and as was expected, the set wasn’t all that different to what she delivered at Glastonbury the previous day, with a few extra tracks thrown in to beef it up. Nothing was in there just for the sake of it though, and every track was welcomed with open arms by the crowd, a crowd which were focused and showing their love throughout, very few people were tied up in conversation, it was purely all about the music, something which should happen a lot more. It pays great tribute to St Vincent’s ability that she can come onto the stage and silence conversations. 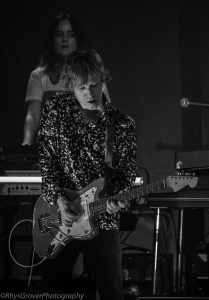 After the 15 main tracks, which included an opening three of; ‘Digital Witness’, ‘Down’ and ‘Birth In Reverse’ as well as other tracks such as ‘Los Ageless’ and ‘New York’, it came time for the encore. Her return to the stage was met with huge cheers and applause, something which had hardly stopped throughout the night, probably due to the strength of the set list. The encore was formed of three tracks, ‘Your Lips Are Red’, ‘Laughing With A Mouth of Blood’ and ‘The Melting Sun’. It was a night to remember for the entire crowd, and a pleasure to have been able to attend, and witness something quite so magical. Her tours are only small, but if you ever get chance to see St Vincent, grab the opportunity with both hands, you will not regret it.