The Stranglers Played Host At The O2 Apollo

The band are currently on their final full UK tour

The Stranglers rose to fame in the 70s and 80s, with their iconic punk sound and their hit singles such as ‘Golden Brown’, ‘Peaches’ and ‘Nice’n’Sleazy’. Sadly over recent years, the band have lost members to lineup changes and most recently, lost key founding member Dave Greenfield who was behind the iconic keyboard riffs of some of their biggest tracks. The band had this tour scheduled for 2020, and now two years down the line, have adapted the tour as a commemoration to Greenfield, as well as giving fans the first (and likely last) live taste of their latest album, ‘Dark Matters’. Throughout the tour, the band are joined by The Ruts/Ruts DC.

After a strong support from The Ruts/Ruts DC, The Stranglers took to stage as ‘Waltzinblack’ played out through the speakers, a track taken from their 5th Studio Album, ‘The Gospel According To Meninblack’. The band then launched into ‘Toiler On The Sea’, which was met with cheers and applause from the adoring crowd. The band are still a four piece, however only bassist JJ Burnell remains from the original lineup, and the rest of the band is made up of long standing member Baz Warne, as well as Jim Macaulay and Tony Hounsham, the latter of which has taken the place of Dave Greenfield and it wasn’t long before he was thanke3d by the band and crowd for filling such big boots. 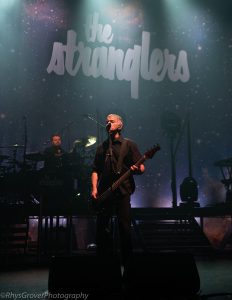 Whilst this tour is partly for their latest album ‘Dark Matters’, it’s also a bit of a greatest hits affair, and the set list had dashings of most of their studio albums throughout. Albums such as ‘Black and White’ and ‘Rattus Norvegicus’ took the majority of the set list, with a couple of songs pulled from albums such as ‘La Folie’ and ‘No More Heroes’. Whilst the band have a few standout hits, their fan base is devoted and as a result, the crowd were belting out 90% of the set list, so it was a bit of a hit after hit type affair.

After a stunning main set, the band left for the first of two encores. The first made up of ‘The Lines’ and followed by a beautiful tribute to Dave Greenfield, with a track off their latest album, ‘And If You Should See Dave…’. After the rather moving tribute, the band left stage, returning for their second encore, made up of ‘Go Buddy Go’ and ‘Tank’, before a beautiful finale of ‘No More Heroes’ rounded off an excellent night of some of the finest examples of punk music you’ll ever come across.

Going into the venue, I was unsure of what it would be like now they were without a member as key as Dave Greenfield, but the band still sounded just like The Stranglers, and it was special to see them be able to continue the tour despite such a big loss.