Skip to content
Live: The Undertones At Manchester Academy 2

The Undertones Are Currently On Tour In The UK

Hugh Cornwell is supporting the band throughout the tour

Last night, The Undertones took to the stage at Manchester Academy 2 for a lively night of new wave hits. They had brought along Hugh Cornwell to kick proceedings off, who is touring with the band to support his latest musical endeavours. Part of me did expect a band who have been as culturally significant as The Undertones to be performing in a venue bigger than Academy 2, however it was a fanatically intimate atmosphere, and was packed out to he rafters with gig goers, reliving their youth. 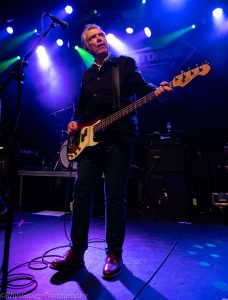 ‘Family Entertainment’ opened their set, and from the off there was swagger and attitude amongst the band. Each member owned their portion of the stage, and frontman Paul McLoone was like Jagger’s long lost twin, pouting and swaying around the stage, building up the energy in the room, and pulling in the crowd. With the band primarily being known for their early punk roots, they can cram a lot of songs into a not all that long set, with the average song being just a couple of minutes long, and the crowd were loving it. There wasn’t much interaction in between the tracks, but the crowd were hanging off the every word of each member whenever they did have something to say.

Unfortunately, Billy Doherty was taken ill during the tour this week, and the band had chosen to carry on without him for the night, having cancelled their previous night. ‘Billy’s Third’ was included in the set-list, and the band took the opportunity to dedicate the track to the health of their bandmate.

Whilst the band have an extensive catalogue of incredible music, there is one track which everyone, whether they are a fan of the band or not, knows. This is of course, ‘Teenage Kicks’ and when the time came for this track, the room lit up with a raucous noise and I’m pretty sure there was nobody in the room not singing along to the iconic track. It summed up the night in one track really, a bunch of dedicated fans crammed into a rather intimate venue, hanging off each and every word of the band which they have adored since their beginnings in the early 70’s.