The band were supported by Dea Matrona

Feeder have maintained a healthy popularity over the last 20 years or so, with their big hits getting regular airplay and being singalong anthems still to this day. With the release of the new album, ‘Torpedo’ the duo have taken to stages across the UK to tour the new album, and bring out some of their older material to their adoring fanbase. Last night, Manchester got the Feeder treatment, and it was one hell of a performance.

They kicked their set off with a trio of songs from their latest album, which has been out for a month or so now, and fans are already extremely familiar with the tracks. ‘The Healing’ opened the set, before being followed by ‘Magpie’, which was released as one of the singles from the album ahead of its release. If you think ‘Magpie’ is a heavy track when listening at home, it’s even more full on when performed live. ‘Born To Love You’ completed the opening trio of ‘Torpedo’ tracks, and by this point the band were in full swing and owning their places on stage. 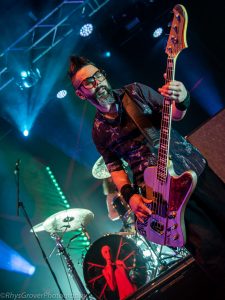 Feeder have two long standing members, having originally been a three piece until the tragic suicide of drummer Jon Lee in 2002 (who they dedicated a track to during their set), with Grant Nicholas and Taka Hirose continuing the band in his legacy. To convey their incredible sound live, they bring in a trio of session musicians for drums, guitar and keys. Some of these musicians have been with the band for years, and are treated as part of the Feeder family by both the band and the crowd.

Feeder continued their set with a healthy mix of tracks from their older albums, and a good helping of tracks from their latest offering, including bonus tracks from ‘Torpedo’ which some fans may not have heard. Towards the end of their set, they began to bring out a couple of tracks that hadn’t been performed for a while, including ‘Insomnia’ which is the first time the track has been played on this tour. It received huge welcome from the fans, who were buzzing throughout the night, with the entire venue bouncing from front to back, especially for tracks such as ‘Just The Way I’m Feeling’, and then for their incredible two song encore for the tracks everyone had been waiting for. 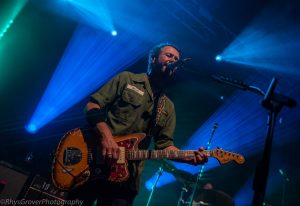 ‘Buck Rogers’ came first, and the crowd went ballistic. Pints were being thrown, people were up on each other shoulders and some crowd surfing. It was an atmosphere capable of matching any festival or Arena gig, and it was happening in Manchester Academy. This is what live music is all about. ‘Just A Day’ finished off the set to huge cheers and incredible crowd participation, as everyone chanted that signature guitar riff.